Sketches by The F-Tones
is Out Now! 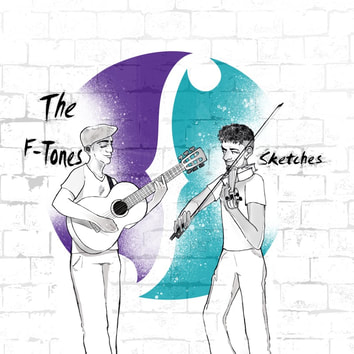 With about four year to their existence The F Tones came from humble roots as two college friends who decided to start busking in Central Park in the late summer of 2015. Soon enough after seeing the reception they were attracting it became clear to them that their music was different. After being asked to perform as the featured Artists of many concert venue in NYC like Lunar Moon Celebration for The friend of the High Line to Bushwick Stories at Hell Phones promoted by Nomadic Press, and a recent spread in the Kings Newsletter, the F Tones comprised of Dwayne Beach on 5 string viola and Marcin Wisniewski on Guitar have been spinning out fresh and velvety covers of pop tunes and yielding out an amazing palette of sounds with their own compositions.

With their first CD "SKETCHES" released after much anticipation, the F-Tones are getting ready to bring their music to you. The F-Tones are really excited not only to make accessible a captivating fusion of acoustic classical, folk, gypsy jazz, and world music elements in their pop renditions, but to help expand the audience's awareness of instrumental music and gear their ear toward classical music, as the once thriving classical music community is now withering away. This Brooklyn based Duo uses popular and classical music in quite interesting way using Latin rhythms and various dance pattern to suspense melodies previously heard, transforming pop into classical and classical into contemporary pop.   Marcin a Polish-American, and Dwayne a Belizean-American have very high hopes for this upcoming years creating music together.